You can buy a lot of weird things on eBay, and apparently haunted dolls are on that list. Like with most supernatural things, I can’t help but wonder about these dolls, and the people selling them, who have written elaborate descriptions of what the dolls have done, and even the names and stories of the spirits are haunting the dolls. (Which they know…how?) Are they sincere? Did they actually experience these things? Are they delusional, and they only think they did? Or have they come up with inventive stories to increase the amount of money they can get in for an otherwise unremarkable doll in an eBay auction? The cynic in me thinks it’s probably the last, because ghosts aren’t real but human greed is. yet there’s still part of me that wants to believe, that wonders what would happen if I bought one of these dolls… 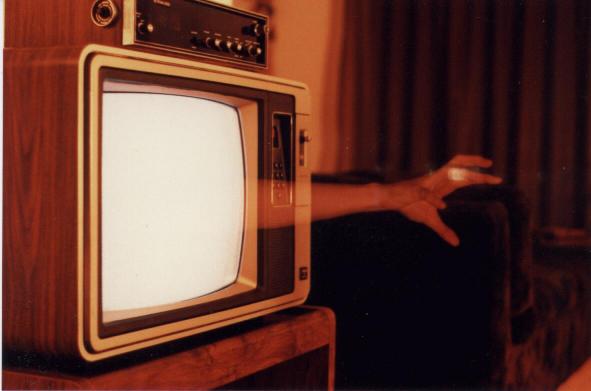 When you think of haunted televisions, you might think of Carrie Ann being dragged into the static in Poltergeist, or the creepy girl from The Ring clawing her way out of one. However, as outlined in this fantastic article on Mysterious Universe, there are actually a number of reported cases of actual TVs being haunted by actual spirits. Perhaps such stories are the result of fear of technology, an uneasy relationship with an object that can sometimes seem like an enemy, sucking our time or turning our loved ones into brain-dead pod-people. Or maybe there is actually something supernatural going on. There are a number of theories that the dead can manipulate electromagnetic fields, which is the idea behind EVP (electronic voice perception), where the voice of spirits show up on audio recordings. Is it possible for a spirit to similarly manipulate what appears in the static of a TV not tuned to any specific channel? Or can TVs be haunted in the same way as other objects, such as dolls or cars or houses?  I know I’m going to be a little uneasy around my TV for a while…

Hauntings happen when there’s a failure to move on from the past. According to lore, people become ghosts when they’re unable to be at rest due to some unresolved issue, some inability to accept the past and let go.  And I think that’s the key to any sort of haunting, literal or figurative.  People are haunted when they are unable to let go, of a lost love, of a trauma, of things that were and things that could have been but weren’t.  Poe deals with that head on in this song, “Haunted.”

Listen, and consider: what haunts you?

One of the themes I explore in my book Haunted, and the reason for the title, is how all of us are haunted by our own ghosts. In one aspect of the story, that haunting is very literal, but there are several other hauntings going on: Steven is haunted by his feelings for Tara. Paul is haunted by his abilities and the effect they have on his life and relationships.  And Tara, both literally and figuratively, is haunted by her past. And I think we can all relate to this. We all have our ghosts, the shadows that darken our thoughts and will not leave us alone, and yet when we reach for them our hands go right through the mist.

This is Dessa with “Call Off Your Ghost.” I wish I could say I haven’t been where she is, but I’d be lying.

Jenn at “Give A Hoot Read A Book” reviews Haunted HERE!

In the world of my Haunted series, cemeteries are very rarely, if ever, haunted.  In those metaphysics, a haunting is the result of a deep attachment to a location (or sometimes a person) that keeps a spirit bound to the physical world and unable to transcend to the spiritual.  The attachment isn’t to the body, and thus places like funeral homes and cemeteries aren’t haunted. (Unless they’re haunted by former funeral directors or gravediggers!)

In real life, I’m intrigued by tales of haunted monuments.  Chicago has several, including one in Rosehill Cemetery, where I used to work (a tomb for a mother and child that is said to be enshrouded with mist on the anniversary of their deaths).  Even if there is nothing paranormal going on (and I remain agnostic on the subject) the psychology of it is fascinating.  We are simultaneously frightened of and drawn to the restless dead.  We want to believe that when we talk to a loved one at their grave, there is more listening than birds and worms and cold earth.  But we’d still run in terror if someone or something were to talk back.

My husband’s family lives in the Chicago area, so chances are we’ll be visiting in the near future.  I’m going to have to visit Inez.  I’ll even bring a stuffed animal, in case the legends are true, and the girl, so young and yet so ancient, still wants to play.

[The real estate agent] stepped closer and smiled tightly. “Mr. Trent,” she said in a low voice, “It is a house. It is a property that I am trying to sell. And that is all. Mr. Lacey has requested that you be granted access, and that’s his right. But I would appreciate it if you left me out of it – and didn’t go blabbing your mouth and making my job harder.”

Steven tilted his head. “You did see something, didn’t you?”

Read more HERE at Top o’ Morning to Ya!

The stacks were dark, save for a small bulb that illuminated the light switches – and even when Tara flipped these on, the rows and rows of books were only dimly lit. The overhead fixtures hung down in hemispherical metal shades, grimy with dust.

Tara started walking, and Steven followed. She studied the card in her hand, then began scanning the call numbers of each row she passed. Suddenly she stopped and frowned.

“Did you hear something?”

Read an excerpt of my novel Haunted here at Blog-A-Licious Authors!