This drawing is a perfect example of the uncanny valley, and creeps me the heck out.  Those feet, man! 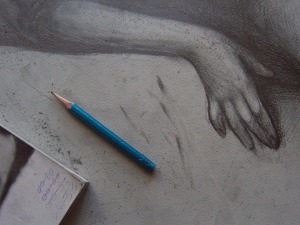 When I was a sophomore in college, I decided to take an intro drawing class.  I had always loved art and drawing, and had filled many sketchbooks as a kid, mostly with cats.  I thought taking a class would be fun.

I had no idea what I was in for.

I arrived on the first day of class with my required sketchpads and pencils and charcoals, not knowing what to expect but excited to get started.  There was a circle of easels in the studio, and we were told to pick one and set up with newsprint and a pencil.  I was just about ready when a stout man walked into the room, barefoot and wearing a powder blue bathrobe.  He strolled to the center of the circle, and with a complete lack of reservation shed the bathrobe, revealing that he was entirely naked underneath.  He placed a fist on one hip and held out his other arm, his hand dangling limply from his wrist.

I was shocked, and felt stupid for being shocked.  The course description had mentioned exploring the human form, but for some reason I didn’t realize that meant nudes.  I couldn’t look straight at the man.  I was fighting the urge to dissolve into nervous laughter, and felt stupid for that, too.  What was I, twelve?  No one else was laughing.

Then the door opened, and two students came in.  They saw the naked guy and their eyes went wide.  “OH MY GOD!” one of them gasped, and they turned tail and rushed out, the door slamming behind them.

Several of us laughed. The tension was broken, and I was able to actually start drawing.  Granted, I was still pretty uncomfortable.  And I still wasn’t able to draw anything below the waist of our model…that took a couple sessions.  But at least I wasn’t afraid I was just going to start giggling uncontrollably.