I’ve talked here about growing up on the Beatles.  My musical obsession doesn’t stop with the Fab Four, though.  Not by a long shot.  I have nearly a thousand songs on my phone, enough that I bought an external SD card just to hold all my music. Sometimes my taste is shamefully pop (Taylor Swift, even the occasional Britney Spears, yes, I know).  Sometimes I go for idie (Imogen Heap) or folk (Crosby, Stills & Nash or Danny Schmidt).  I usually don’t go for rap, but love Tim Fite; Don’t go for country, but love Johnny Cash; Don’t go for classical, but good god, give me all the Chopin.  And although I’ve got some songs from John Lennon’s Double Fantasy and Paul McCartney’s “Maybe I’m Amazed,” none of that is Beatles music.  Mainly because I buy my music from Amazon, and I think the boys from Liverpool have an exclusive agreement with iTunes.

Yes, I pay for my music.  Yes, that means that over the last five or so years, I have spent over a thousand dollars on mp3s.  Yes, I know I could probably have gotten most or all of that for free.  As a creator myself, I believe in paying for what other people create.  Yes, I know that the artists probably see very little of that money. The principle still stands.

(I should note that as much as I love music, I would not call myself an audiophile, because I honestly don’t care whether or not the songs I love sound better on vinyl than digital, or on thousand dollar headphones than ten buck earbuds.  Purity of sound?  Screw that, I just want to have my music with me wherever I go, and mp3s and earbuds do that splendidly.)

I buy some music based on recommendations from friends (like K’s Choice’s “Not An Addict,” a recommendation from my friend MJ) and critics like the guys on Sound Opinions (a radio show/podcast I thoroughly enjoy and recommend, and which turned me on to artists like The National and Tim Fite).  But for the most part, the music I buy are songs I’m familiar with, that I hear on the radio or that get into my head, and I am struck by a serious need to own that song, put it on repeat and play it for HOURS.  (That’s an exaggeration.  Usually.)  Recently such songs have included “Cherish” by The Association, “Alejandro” by Lady Gaga, and “Odds Are” by The Barenaked Ladies.

I listen to music pretty much anytime.  Even when I’m writing.  My theory is that the music keeps the restless part of my brain happy so that the rest can concentrate on the words.  I’m even listening to music right now.  A “Build Me Up Buttercup” cover by frantic (Best.  Cover.  EVER.)  When I pay attention to the music, I bop around in my chair and mouth the lyrics.  In the middle of Starbucks.  Are people staring?  Probably.  Do I care?  Nope!

Now, excuse me while I rock out to “Gone Away” by The Offspring… 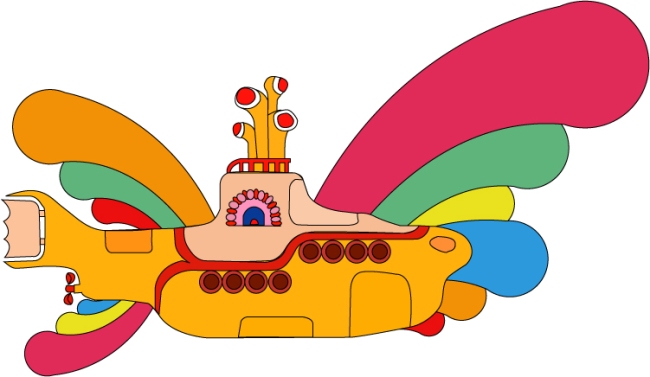 I love Yellow Submarine.  I have ever since I was a kid.  The unabashed surreality tickles that imaginative part of my brain that believes that even the fantastic is possible.  Not to mention the Beatles are my favorite band.

However, whenever I think about Yellow Submarine, I cannot help but remember that the Beatles didn’t actually voice their animated counterparts.  This sort of disconnect between appearance and substance is pretty common.  Think of Nancy Drew; the series is ostensibly written by Carolyn Keene, but Keene doesn’t exist, and the novels are penned by a team of ghostwriters. Think of the 1969 erotic romance novel Naked Came The Stranger by “Penelope Ashe”, which was actually written by a group of journalists to be intentionally and horrifically bad as proof that American readers have abominable taste. (Sure enough, it became a bestseller, and the authors hired an actress to go on book tours as “Penelope.”)  And Milli Vanilli aren’t the only musical group in history where the pretty voices don’t actually come from the pretty faces.

I’m sure this phenomenon goes beyond the arts.  Take politics.  When we elect someone to public office, who are we actually electing?  A candidate?  Or a pretty face and pretty voice saying pretty words fed to them by speechwriters who work for parties or lobbyists or masons or lizard people?  Who is the man (or woman…or reptile…) behind the curtain?

(I’m joking about the lizard people.)