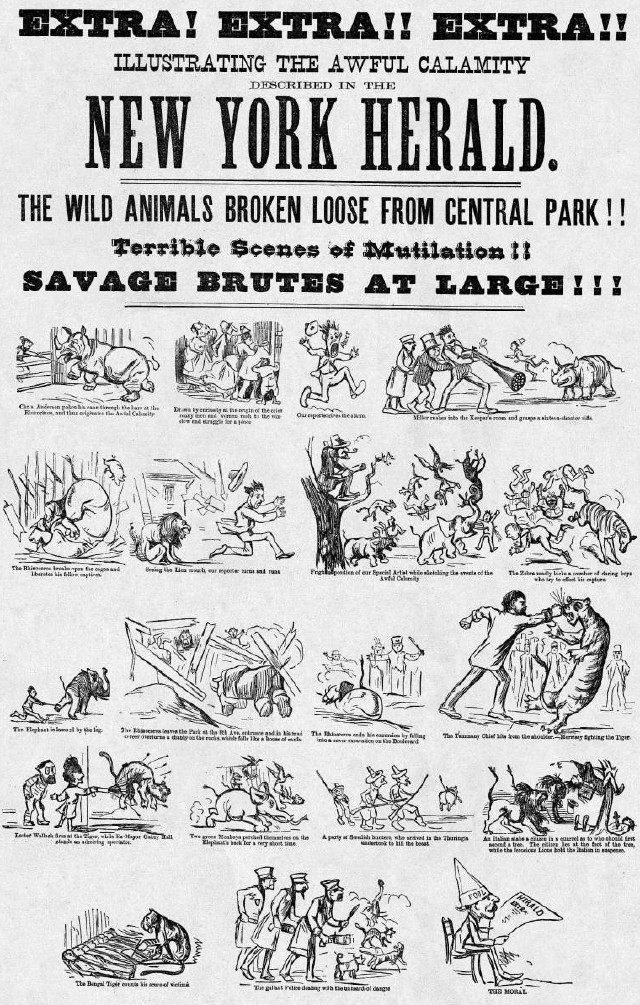 Happy April Fool’s Day!  Remember, today is a day to not trust anything you see on the internet. You know.  Like every other day ever.

But this you can trust.  Really.  I promise. If you don’t believe me, you can check out the original story on the awesome site of the Museum of Hoaxes.

On November 9th, 1874, the New York Herald ran a front page story that proclaimed in the most alarming terminology possible that the animals in the Central Park Zoo had busted out of their cages and were at that very moment rampaging through Manhattan.  The article recounted the carnage in gruesome detail (one of my favorite quotes: “The panther was crouched over Hyland’s body, gnawing horribly at his head”).  People freaked.  They called the police, armed themselves, and went to rescue their children from school.  According to the Museum of Hoaxes account, the editor of The New York Times “ran out of his home waving two pistols in the air, ready to shoot the first animal he encountered.”

It was, of course, all a hoax.  If you look at the illustrations from the story, at the end of the cartoonish carnage there is an image of a man wearing a dunce cap and reading the New York Herald.  The caption reads “The Moral.” And people would have known that this account was entirely fictitious had they only read to the end of the article, which closed with this statement:

“Of course the entire story given above is a pure fabrication. Not one word of it is true. Not a single act or incident described has taken place. It is a huge hoax, a wild romance, or whatever other epithet of utter untrustworthiness our readers may choose to apply to it.”

If Facebook had existed at the time, I have no doubt that this story would have been shared thousands of times to widespread outrage before anybody took the time to actually, you know, read the article they were spreading.  And that’s human nature.  We want to believe what we’re told, especially when it’s as awesome as zoo animals rampaging through New York City and leaving a bloody trail of corpses in their wake.

Have fun today. And don’t believe a thing you read.