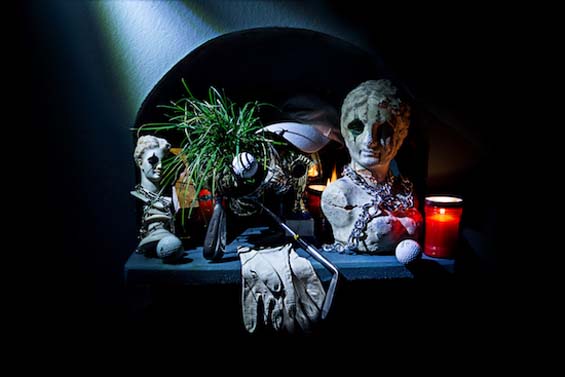 Many cemeteries have columbaria, rooms or buildings with niches where cremation urns may be placed.  Often these niches have glass fronts, and in addition to urns people place objects that represent the identity and life of the deceased.  The above image is photographer Dan Bannino’s idea of what Alice Cooper’s niche might look like.  As you can see, there are things that we would expect … the busts with his iconic eye makeup … and things we might not, such as the golf club and gloves that reveal a hobby that seems antithetical to our idea of a shock rocker.

What would fill your niche?  It’s a hard thing to think of, because how could a life fit inside such a tiny space? Maybe mine would have yarn and knitting needles, a skull, a pen and ink, a TARDIS, pictures of my kids, copies of my books.  Maybe a crucifix, a Red Sox cap, a Yale pennant.  A guitar.  A work by Dali.  It’s a difficult task, which is reassuring, since it means that our lives cannot be merely boiled down to what fits in a hole in the wall.

[If you would like to see other photographs in this series by Dan Bannino, you can find them here.]