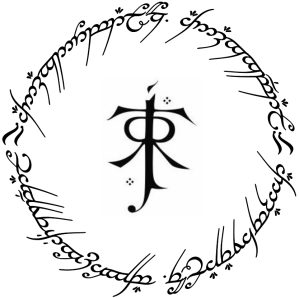 I’ve read that when Tolkien first wrote The Hobbit, the ring that Bilbo found in Gollum’s cave was nothing of any great importance.  He needed some method for Bilbo to escape, so the hobbit conveniently found this magic ring that made him turn invisible!  It wasn’t until he was asked to write a sequel that he realized this seemingly insignificant trinket was actually an object of great, perhaps the greatest, importance.  He even wound up going back and rewriting The Hobbit to strengthen the role of the ring and add some foreshadowing.

I’ve experienced this phenomenon in my own writing.  In my novella Haunted, I described one of my main characters, Tara, as being one of those people who always dresses like the room is a good ten degrees cooler than it actually is.  It was just how I saw her in the book’s opening scene, sitting there in a lecture hall in a white collared shirt and a heavy brown cabled sweater.  But as I continued writing about her and her friends and their passion for hunting ghosts, I found myself wondering about that characteristic I’d given her.  Why was Tara always cold?

And then it hit me.

Tara was being haunted.

And suddenly an off-handed detail about Tara’s appearance became the central plot.

I’m currently working on book 2 in the Haunted series, working title Committed, and the exact same thing has happened, again with Tara.  It started with Tara’s senior project, which involves killing rats and slicing up their brains to study the influence of behavior on brain function.  It occurred to me, again well into writing the novel, that Tara might be receiving hate mail for killing animals in the name of science.  I wondered how people would find out about her research, and decided, hey, Tara’s a particularly talented student in neurobiology.  Maybe she appeared in an article about up and coming scientists in some pop psychology magazine.

And BAM!  I had a central plot point.  I’ll let you guys guess what it is 😉  You’ll have to wait until Committed is released before you find out whether or not you’re right.

I love when these things happen.  It’s probably my favorite part of writing.  My mentor Paul McComas is fond of telling his students that organic fiction involves putting characters in a setting with conflict and then writing to see what happens.  Not knowing what’s going to happen next is terrifying sometimes, but more often than not it’s incredibly freeing.  It allows the conscious and subconscious mind to dance together and produce a plot that surprises me, amuses me, breaks my heart, and hopefully will surprise, amuse and break the hearts of my readers as well.

2 thoughts on “I love it when a plan comes together…”