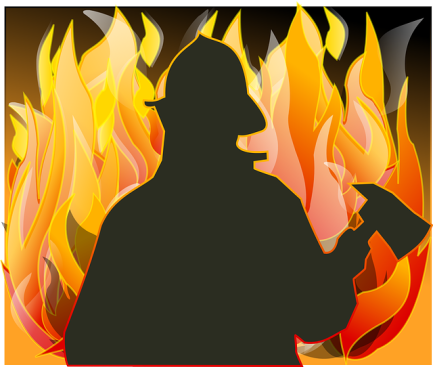 The public library here in Tuscaloosa has a summer reading program that includes special events on Tuesday afternoons.  This week a few firefighters from the local fire department came to talk to the kids about fire safety and show them their equipment, culminating in a tour of the fire engine.  My kids have always adored firefighters (my daughter wanted to be one for a while before deciding she’d rather be an artist and art teacher instead) so they were very enthusiastic about all this.  They sat up front with the other kids while Pete and I sat in the back, Pete analyzing x-ray data on his laptop, me idly checking email and Twitter on my phone.

It was when they started dressing one of the firefighters up in all the gear that I started paying attention.  They went piece by piece: pants, jacket, boots, gloves, helmet.  When they put the face shield and oxygen mask on the guy, they made a point of showing that the firefighter was still the same nice, fun, fatherly guy, only with something over his face that protected him and helped him breathe.  It was a good thing, because the kids were, of course, likely to be scared, and it could be deadly if a kid ran in terror from a firefighter that was trying to save them from a burning building.  Heck, I’d probably freak out if I saw someone in one of those things coming at me through the smoke.

Then they handed the guy an ax, kidding around that “this is the key to EVERY DOOR.”  Again, good thing, because a guy with an ax is freaking terrifying.

I speak from experience.

When I was a junior in college, I lived off-campus in a tiny little studio apartment, just me and my cat Jane.  I was reading one day, minding my own business, when the building’s fire alarm went off.  My first instinct was to ignore it, since surely it was a malfunction or something, and not actually a fire.  No fire alarm I had ever heard had ever had anything to do with an actual fire.  So I went on reading.

The fire alarm continued.  But it was the sirens that made me rethink my assessment.  When the sirens seemed to stop outside the front of my building (my windows faced the back, so I had to guess) I figured I should probably get out of the building.  I dug out the cat carrier, hunted down the cat, and headed for the door.  I felt the door and the doorknob to see if either were hot (thank you, firefighters in my hometown who came to talk when I was a kid).  Neither were, but I looked out the peephole just to make sure the hallway wasn’t on fire.

A firefighter was climbing up the stairs.

There was no way I was going out that door.

I turned to my windows, which lead out to an ancient black wrought iron fire escape.  I was just about to take that way out when the fire alarm stopped.

I stood for a moment, listening closely, wondering if it would start again, and smelling the air for any hint of smoke.  Nothing on both counts.

I went back to the door and looked out the peephole again.  The firefighter with the ax was in the hallway, but he had been joined by a second firefighter, and they were calmly talking.  Figuring that the chances of two deranged homicidal firefighters were pretty low, I opened the door a little and looked out.

It’s a good, important thing for the firefighters to show the kids that the firefighter with an ax and breathing apparatus who comes to rescue you from a fire is a good and trustworthy guy that you should not be afraid of.  It’s a good thing for the parents to remember, too.  Although, if I were to be in that situation again?  There’s still no way in hell I’d go out that door.