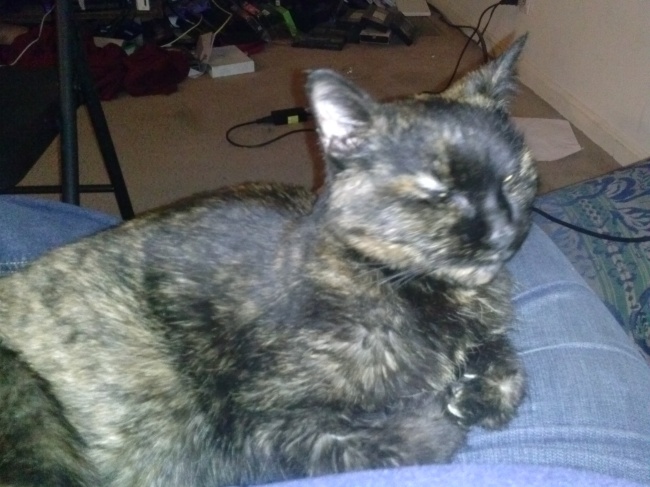 Our 19 year old cat Jane died last Saturday.  This is part 3 of the story of her place in our lives for the last 16 years.

Jane was 17 years old when we moved to Tuscaloosa, AL, in June of 2012.  It was the first big move in seven years, and I had some concern that she might not take to it as well as she had before.  She didn’t complain like she had in the past, remaining silent on our two day drive south from Illinois.  Her quiet worried me;  I wondered if she didn’t have the energy to protest like she had before.  I also started to wonder what would happen after Pete’s three year post doc was over and we had to move again in the summer of 2015.  Jane would be 20.  Would she be able to survive the move then?

She made it to Tuscaloosa, though, and seemed to be adjusting well, even after we added a dog to the family (another rescue animal).  That December, though, she started not being able to make it to the litter box, so we set her up with food, water, a bed, and her litter box in the kids’ bathroom.  We’d take her out when we could be with her and make sure she got to the box when she needed to.

Six months later she started having seizures.  One night Pete and I were jolted out of sleep by the sound of something heavy being smashed.  We ran to the bathroom and found Jane twitching on the floor next to the shards of her ceramic water dish.  When she had another seizure the next night, we took her to the vet.  Blood tests suggested that her kidneys weren’t working at full capacity, but only just, and the vet wasn’t convinced that was causing the seizures.  He recommended against more invasive tests, though, since Jane was 18.  We switched her food to something that was particularly easy on kidneys, made sure she had enough water, and stayed with her whenever we heard her having a seizure.

She had another seizure last week on Tuesday night.  On Wednesday I noticed she was having trouble jumping up onto the counter where her bed and food were.  When I put her up there, she walked right off the edge, dropping into a pile of tangled limbs on the floor.  I took her out and kept an eye on her.  By that evening her back legs weren’t working right, and she kept walking right off the edge of the bed and the couch.  I stayed up with her that night, and watched as she got weaker and weaker.  By Thursday she was in a coma.  I stayed home with her, holding her in my lap, sure she was going to die right then and there.  When Pete came home from work, we tried giving her some sugar water.  She woke up.  I thought maybe she could pull through this, so I took her to the vet the next day.  He gave her subcutaneous fluids and some vitamins and steroids, and told me that it was the best we could do to give her a fighting chance.  I would know by the next day if she was going to pull through.

Jane seemed perkier for a little while after I brought her home from the vet, but it didn’t last.  Soon she was limply on her side again, her breathing labored.  She was purring and kneading her paws, both self-comforting actions.  We continued to give her water and a calorie heavy gel as the vet had recommended, and kept her in bed with us that night.

The next day I brought her with me into the living room to be with all of us, and that afternoon she died, in my arms and being petted by Pete and the kids.  We buried her in the backyard.  We put a cement block over her grave to discourage animals from trying to dig her up, and my daughter covered it with flowers.

The name Jane means “gift from God.”  And she was that.  She was a companion during some of my darkest times, a constant as our lives were repeatedly uprooted, and taught us the value of caring for someone we love, even to the very end.  I tell my kids that we should try to focus on cherishing the time we had with her rather than mourning her loss.  I struggle to take my own advice.  I miss her, very much.  She was a rescue cat, but she rescued me, so many times and in so many ways.