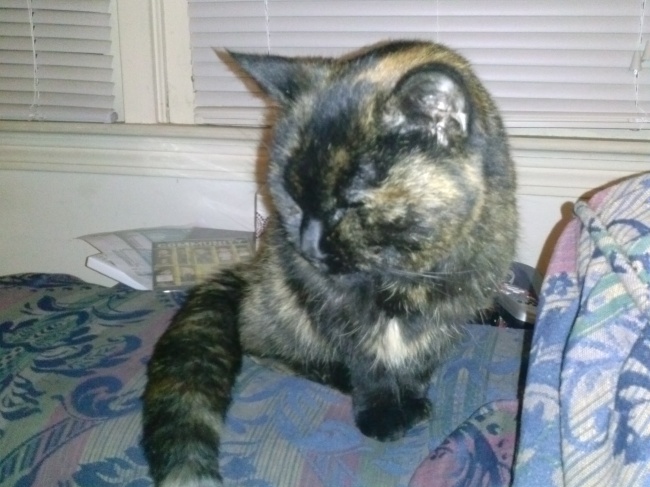 My 19 year old cat Jane died last Saturday.  This week I’m writing about the 16 years she spent with us.  Part 1 can be found here.

Most cats don’t do well with moving from place to place. Jane was different.  I, and later we, moved from place to place in pursuit of degrees and jobs, and Jane came with us.  It was the one non-negotiable: any apartment we rented had to allow cats.  Jane was family, and I refused to leave her behind.

After I graduated from Yale in the spring of 2000, I moved up to Massachusetts to take a job at the Peabody Essex Museum in Salem.  We lived in a tiny basement apartment that was about as big as the living room of the house I live in now.  At first it was just Jane and I; a couple months later my then-boyfriend (now-husband) Pete unofficially moved in after leaving his job in New York City to take a job in Cambridge.  After a year in Salem, we lived in Arlington, MA, for a year, then moved to Cambridge, MA, so I could go to grad school.  Place to place, Jane was a constant.

Other parts of our life changed, though.  Pete and I got married in the summer of 2002.  That fall we helped a friend by taking in his wiry black cat named Babs (the cats hated each other, but eventually learned to co-exist). My son was born in August 2004, and Jane proved to be sweet and patient with him.  Summer of 2005, we moved to Evanston, IL, where we would live for seven years while Pete worked toward a PhD in astrophysics at Northwestern.  My daughter was born there in December of 2006; again Jane was sweet and patient, nuzzling and at times licking her.

In our first year in Evanston, I noticed that Jane was having trouble chewing her food.  I took her to the vet, and they extracted the teeth from the top left hand side of her jaw.  The vet was suspicious of how easily the teeth came out, so she did a biopsy.  It came back positive for squamous cell carcinoma. The vet told me they could do surgery, and chemo, but that it would be expensive and only extend her life a little.  If I did nothing, Jane would die in six months.  I was heartbroken, and prepared myself to lose her.

Six months came and went.  Jane didn’t get sick.  At all.  Babs, on the other hand, started having kidney issues, and died two years later.

In 2011, it looked like Pete might take a position in Germany.  Once again, taking Jane with us was non-negotiable, so I started preparing necessary paperwork.  Jane needed an ident chip and a bunch of shots, so I took her to the vets’  office that had removed her teeth and given her a death sentence.  A different vet saw her.  When he walked in, he had her file in his hand, and looked suitably shocked.

“The same Jane that had some teeth removed five years ago?”

“The same Jane that had cancer?”

She was 16 years old, and perfectly healthy.  The vet speculated that the diagnosis was a mistake, that the person who did the biopsy screwed up.  “We’re not infallible,” he said.

Maybe.  Maybe she was just a tough cat.  Regardless, she was alive, healthy, still with us, and coming with us to Germany.

At least, she would have, had the opportunity in Germany not fallen through.  As it was, we stayed in Evanston for another year, then all of us moved to Tuscaloosa, AL, in the summer of 2012.

Coming up in Part 3: Growing old, last days, and reflections on rescue.