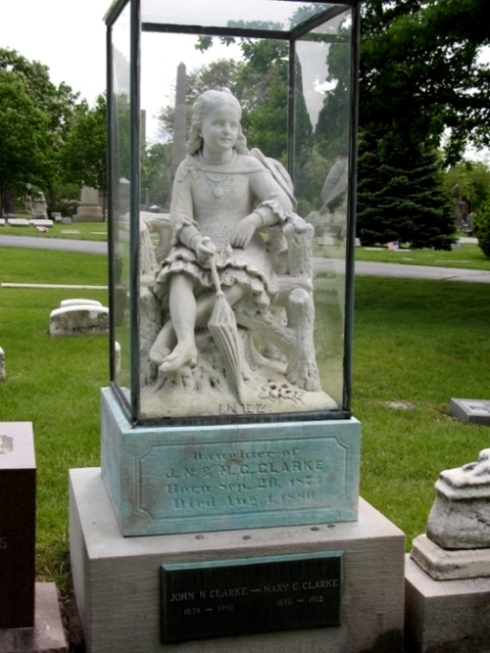 In the world of my Haunted series, cemeteries are very rarely, if ever, haunted.  In those metaphysics, a haunting is the result of a deep attachment to a location (or sometimes a person) that keeps a spirit bound to the physical world and unable to transcend to the spiritual.  The attachment isn’t to the body, and thus places like funeral homes and cemeteries aren’t haunted. (Unless they’re haunted by former funeral directors or gravediggers!)

In real life, I’m intrigued by tales of haunted monuments.  Chicago has several, including one in Rosehill Cemetery, where I used to work (a tomb for a mother and child that is said to be enshrouded with mist on the anniversary of their deaths).  Even if there is nothing paranormal going on (and I remain agnostic on the subject) the psychology of it is fascinating.  We are simultaneously frightened of and drawn to the restless dead.  We want to believe that when we talk to a loved one at their grave, there is more listening than birds and worms and cold earth.  But we’d still run in terror if someone or something were to talk back.

My husband’s family lives in the Chicago area, so chances are we’ll be visiting in the near future.  I’m going to have to visit Inez.  I’ll even bring a stuffed animal, in case the legends are true, and the girl, so young and yet so ancient, still wants to play.