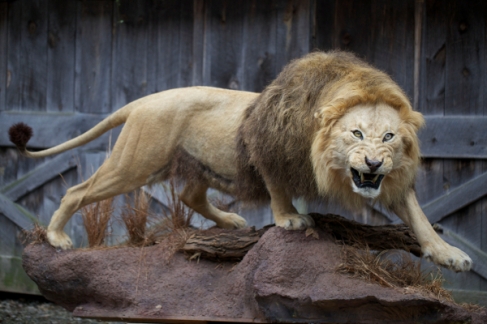 There’s a pawn shop close to our house that has an abundance of items you’d expect at a pawn shop: stereos, computers, cameras, video games, jewelry, guns.

It also has a taxidermied lion.

(I should note, the above image is not said lion.  It’s actually from The Sterling and Francine Clark Art Institute in the Berkshires.)

The lion stands proud next to the cases full of firearms, his face creased in an eternal snarl, as if challenging any potential big game hunters to a duel to the death.  The ruthlessness of nature against man’s physical vulnerability and technological superiority.

The tableau is ruined by a white card set on the figure’s base.  It reads:

DO NOT TOUCH LION

The lion’s body may be perfectly preserved, but its snarl is toothless.  In truth it’s in danger of destruction from curious fingers leaving behind corrosive oils and children (or adults!) trying to climb it.  It’s no match for human beings.